It’s that time of year again in Charleston. School is out. The beach chairs have been dusted off. The weather is warm, and it’s officially the beginning of summer. Best of all, the beginning of summer brings Spoleto and Piccolo Spoleto, the well-known festivals that have become such an integral piece of Charleston’s rich artistic and cultural backdrop. But with over 35 different acts and performances for Spoleto Festival USA, and countless events for the local Piccolo Spoleto Festival, where does one begin? I took some time this week to explore one of Traveling Ink’s favorite Piccolo Spoleto events, the Outdoor Art Exhibition in Marion Square.

As a newcomer to Charleston, this is my first time to experience Spoleto Festival, and the anticipation has been building for months. When I first moved here last August, I kept seeing the word “Spoleto” everywhere. I didn’t even know how to pronounce it, much less explain to you what it was. Over the last several months, I’ve come to understand the nature of Spoleto and how important it is in the Charleston scene. When I found out I would have the opportunity to interview two accomplished local artists participating in Piccolo Spoleto, I was excited not only to experience the festival for myself, but to see it through the eyes of the artists as well.

I arrived at the Outdoor Art Exhibition located in Marion Square early Tuesday morning. As I made my way through the maze of white tents, the artists were arriving and unzipping the plastic walls to reveal the masterpieces hanging inside. I knew my destination was the eighth station on Calhoun Street, but as I passed each tent one by one, I found it very hard to focus on where I was going with all the amazing images beaming out at me from their tiny nooks. I wanted to stop and look inside every one that I passed, but when I finally reached the tent of Austin Grace Smith, I was so glad it was the one I had chosen. 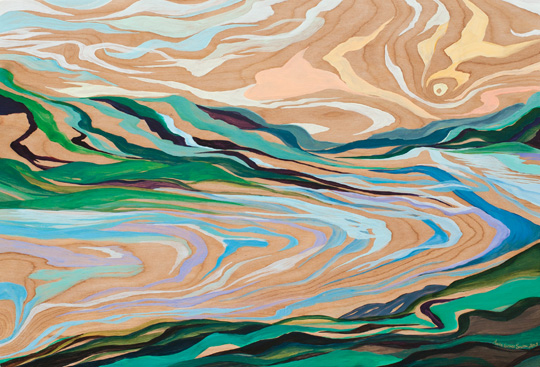 "Awaken the Truth", Acrylic on Birch Panel by Austin Smith.

Smith’s paintings, acrylic on birch, hung in various sizes around the tent. As I looked around, my jaw dropped. I had never seen anything quite like her artwork. She depicted various scenes of sky, water, and marsh, but in a way that made the paintings seem to actually move. The bright colors danced and flowed in front of me, and I could not wait to hear her story. 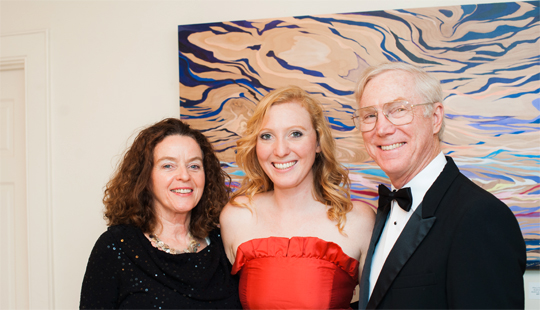 Austin with her parents, Linda and Franklin Smith, at her First Annual Patron Party.

Smith explained that she began this style of painting when her friend commissioned her to make a tide clock out of an old boat door. “I experimented with the wood grain and with letting it show through, and I fell in love with it,” Smith said. She continued working with this unique style, letting the wood grain guide her strokes, and was eventually juried into Piccolo Spoleto to display her exceptional work at the Outdoor Art Exhibition. “This is my first festival, and Piccolo is a marathon!” Smith said. “It’s like the city of tents. You see the same people every day. You know when someone sells something. Everyone is so supportive.”

While Smith talked of the camaraderie between Piccolo artists, her mentor Tate Nation was setting up just a few tents down. Smith said that when she sold her first original piece of the festival, it didn’t take long before Nation found out and came over to congratulate her. Nation is a Spoleto veteran. He has been a part of the festival for 14 years, and his artwork has been chosen as the official Piccolo Spoleto poster artwork twice. He said the artists that gather every year for the festival are a close-knit group, and that he enjoys sharing his experience and expertise with up and coming talent like Austin Grace Smith. “It’s like an artist community out here. Someone new comes along, and we welcome them into the folds. Someone did that for me, and Austin will do that for someone else some day,” Nation said.

"Above King", Acrylic on Wood Panel by Tate Nation.

Nation has definitely earned his mentor status. His impressive resume boasts 15 years as a freelance illustrator with works commissioned by United Airlines, Coca-Cola, Time-Life and many other household names. After experimenting with whimsical themes in illustrations for children’s books and combining that experience with influences from his travels in the Caribbean, Nation has come up with a vibrant and cheerful style that marks his paintings today.

As I walked around his tent, Nation pointed out the vivid layers of colors and complex textures of his paintings, some revealing Caribbean beach scenes and others iconic views of Charleston. “Getting ready for the show is a really big deal,” Nation said. “I was up painting in my studio until 12:30 and 1:00 a.m. for several months. By the time I get to the tent, it feels like vacation.” Though Piccolo Spoleto requires months of hard work and preparation, Nation said it has become the focus of his business. “Spoleto has been wonderful for me. It has helped build my customer base and has totally exposed my work to an international crowd,” Nation said.

Nation and Smith both agreed that Spoleto Festival is not only a fundamental part of promoting local artists, but that the festival contributes a great deal to the City of Charleston itself. Smith, contemplating the benefits of the festival, said, “People are always busy. They’re rushing around every day, but the arts help to slow them down. Everyone wants to see a great show. World-renowned artists all come together for Spoleto, and Charleston wouldn’t be the same without it.”

The outdoor exhibit runs until June 7th. Get out to Marion Square and take a look at the talent within the tents. For more information on Piccolo Spoleto Festival events, click here. To find out more about Austin Grace Smith and Tate Nation, visit the links below.